IGNITING THE FIRE OF EVANGELISM!

By Riley Stephenson
Tonight Kelly shared from Reinhard Bonnke’s book, “Evangelism by Fire.” The first chapter, titled, “When Arson is Not a Crime,” talks about the role of an evangelist, which is to light a fire in the human spirit. This is what we do when we go out to the into the highways and byways; we light a fire in the human spirit. There should be fire in those who witness and work! Fire in those who preach! Fire in the truth we preach!
One lady named Christine spoke up . . . this was her first time to Friday Night Evangelism. She said, “Several months ago, I was at a meeting and someone prophesied over me that I would be an ‘arsonist.’ I didn’t know what that meant, but I knew he was talking about evangelism. I came tonight not knowing what to expect. This is confirmation that the Lord is training me to light a fire in the lives of people!!!!!” Hallelujah!

Christine, igniting the fire of evangelism, in the hearts of these two ladies. The girl, who translated for her mother, is holding the Pocket Reference for Soul Winning Card. 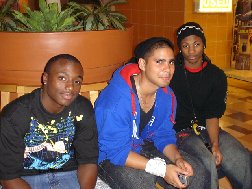 These three young men got saved! Kelly & Christine prayed that they would live on fire for God! The young man on the left said, “I want to come to your church! Where is it?” Kelly gave him the web site and he began typing www.emic.org into his phone. See below!

Go to http://www.rileystephenson.com and download the “Pocket Soulwinning Card.”